Alcohol abuse is dangerous for your health, consume it with moderation.

Looking for a dessert? There's nothing as quintessentially French as the Tart Tatin. Sweet, tart caramelised apples, flaky pastry and decadent cream to round off the perfect meal. This delicious dish was served at our Martell Supper Club, hosted by the London Foodie at his London home to celebrate our 300th anniversary. 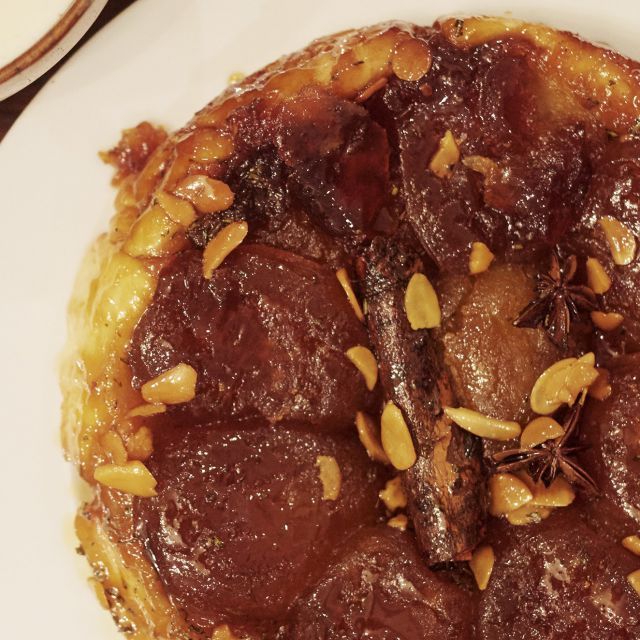 1. The pastry has already been rolled, but I like gently rolling it again on a lightly floured surface until a little thinner for a more delicate and light tart base.

2. Cut out a circle of the rolled pastry slightly bigger than a round 20cm/8” flameproof baking or tatin dish. Roll the pasty over the rolling pin and place the pastry on a baking sheet in a plate, cover with cling film and chill for at least 30 minutes. This will prevent the pastry from shrinking during cooking.

3. Preheat the oven to 180°C. Melt the sugar gently in the baking or tatin dish over a medium heat until golden brown and a clear caramel is achieved (do not over stir the sugar), remove from the heat and stir in the butter.

4. Sprinkle half of the finely chopped rosemary leaves, 1 tbsp of flaked almonds, then place 1 cinnamon stick and 1 star anise on the caramel, being careful not to burn your fingers. The tart will be turned upside down so place the prettiest part of the cinnamon stick and star anise facing the bottom of the dish.

5. Now arrange the apples tightly along the edge of the baking dish in a circle, then make smaller circles of tightly fitted apples within this circle until all surface is covered and all the apples are used. Scatter the remaining finely chopped rosemary and flaked almonds over the apples.

6. Bake in the preheated oven for 35 minutes.

7. Remove it from the oven; place the pastry on top pushing the edges into the dish, then using a fork lightly prick the pastry on a few places, this will avoid the pastry from bubbling up in certain areas, raising evenly as it bakes. Return the tart to the oven and bake for a further 20 minutes.

8. Remove the tart from the oven; put a plate slightly larger than the size of the dish on top of the tart and holding both the plate and dish with a tea-towel, flip to unmould onto the plate. Let it cool down for about 5 minutes before serving, the caramel will be too hot to serve at this stage.

9. While the tarte tatin is cooling, prepare the vanilla crème fraiche by mixing the cream, vanilla essence and sugar in a bowl until the sugar is dissolved.

10. Serve the tarte tatin with the vanilla crème fraiche.

For more recipes from the London Foodie, visit http://www.thelondonfoodie.co.uk/