In the space of twenty years, the French Touch has become one of the biggest musical revolutions of the 20th century through its unique contemporary and planetary sound, whilst widening its spheres of expression into art, graphics, video and fashion.

The French Touch and Martell have been cultivating the same quest for quality, the same demand for shared emotions, and the same desire to show the world this French Art de Vivre, celebrated for 300 years by the oldest of the top brands of Cognac.

Along with Martell blue, the neon lights, iconic modules of the French Touch, have here become the signature of this limited edition. Used in interplay of vibrating lines, with UV ink, they create an electrifying dimension evoking the unique magnetism of the “City of Lights”’ nights.

The graphic design of the electric lines evokes the Cube, equally emblematic for the French Touch and Etienne de Crécy, reminding us just as much of a music studio or of the center stage of a night-club or an art gallery, where one is throbbing to the beat of a musical performance. 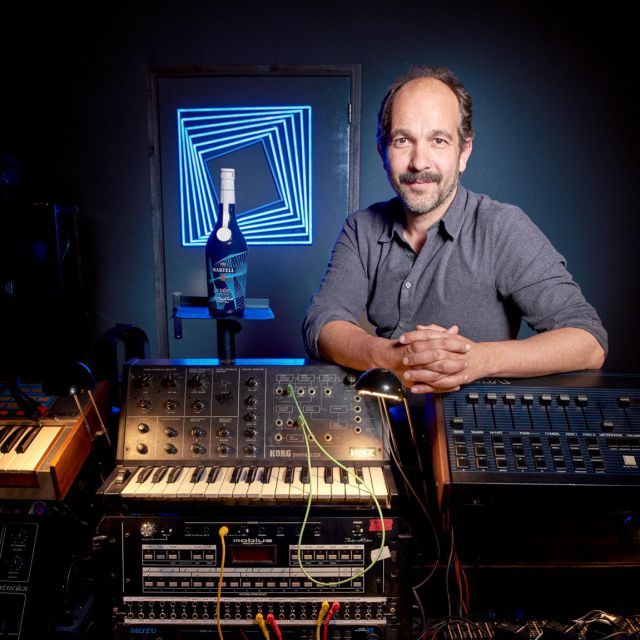 Who is Etienne de Crécy?

DJ and music producer, thanks to his albums, books and the Super Discount trilogy, Etienne de Crécy is today considered to be one of the founders and masters of the musical genre, like Air and Daft Punk.

After launching in 1994 the first album announcing the birth of French house, he launched his Super Discount project in 1995, bringing music and graphism at a new edge In 2008, Étienne de Crécy launches Beats’n’Cubes, a piece of performance art devised by the Exyzt collective: this radical, bright, cubic sound installation travels the world for more than 5 years (headlining Coachella’s Sahara stage in 2008).

As the living incarnation of the French Touch, he is behind the artistic direction of this limited edition, which embodies all the creative collective energy of a French trend, now an international reference.

A bold move! Creating a limited edition which goes beyond the mere universe of one designer and which conveys an extra dimension, something bigger, with more energy... the French Touch! I’m very proud to have been chosen to orchestrate this limited edition